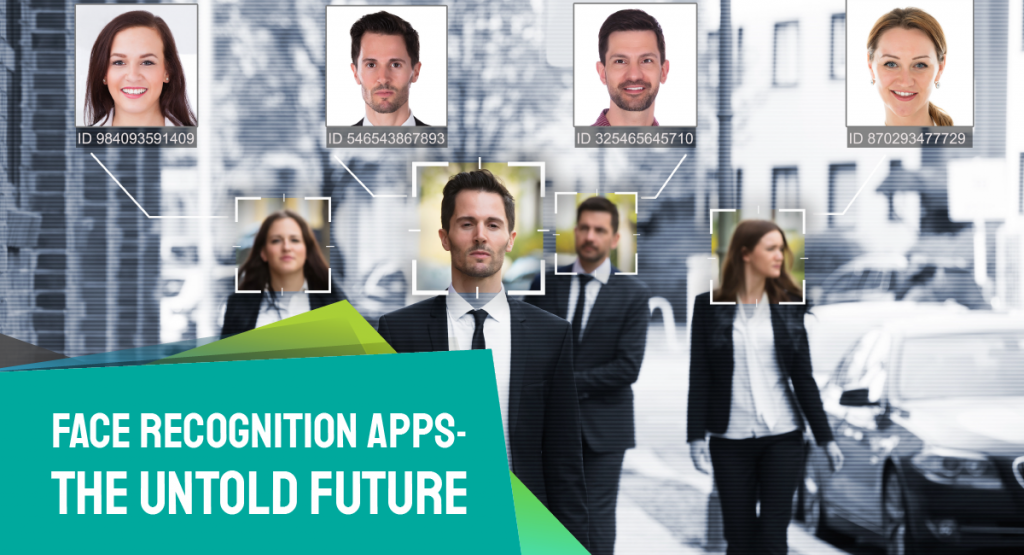 How Face Recognition Apps Are Defining The Future Of Competitive Industries?

There has been a lot of talk about Face Recognition Apps recently. It has received accolades for its use in enhancing security as well as flak over privacy concerns. Speculations aside, there is no denying that face recognition software has revolutionized the way we perceive technology. It is no longer a faraway concept as it finds a place in our pockets through mobile technology.

In this blog, we will look at the technology behind face recognition software, what makes it tick and how it has found application across industries.

What Is A Face Recognition App?

Face recognition is a biometric technology that creates a face print of an individual by mapping out his or her facial features mathematically. This face print is stored and used to compare a digital image of a person verifying their identity.

This mapping is done by identifying 80 nodal points on a human face. These nodal points are used to measure different variables of the face. The width of the forehead, the length of the nose, the shape of the eyes – these measurements are captured on a digital image of the person’s face and stored as a face print. Deep learning algorithms are then used to identify a person in comparison with the face print.

This technology has been used in various ways from automatic photo tagging by apps like Facebook for authentication and identification by Apple’s iPhone X. The way in which Apple has used this technology is interesting. Face ID technology, which allows users to unlock their phones using the stored face print, is designed with 3-D modeling. The software compares over 30,000 variables to fine-tune recognition capabilities. This face print or Face ID can be used as authentication for purchases done with Apple Pay and other Apple stores. Amazon Rekognition, Google Cloud Vision API and other image analysis APIs can be now used to add facial recognition capabilities to other applications.

The inclusion of technologies like augmented reality, mixed reality and more have made face recognition software a powerful force. At Fingent, we developed a mixed reality application using Microsoft Hololens. This application helps in the identification of a person and also links the face print to the biodata of the person. It will also be able to capture images and compute similarities between the captured image and all the other images in a secure database.

The Role of Face Recognition Apps in Safety and Protection

According to a Javelin Strategy and Research study, identity fraud hit a record high with 15.4 million U.S. Victims in 2016 and an increase of 16 percent from previous years. In a connected world where such vulnerabilities exist, face recognition software is proving to be an invaluable asset. The software is helping law enforcement and corporate to put a name to the faces of criminals who have been playing havoc with stolen identities. Some applications of face recognition software in ensuring safety are:

How Various Industries Can Benefit from Face Recognition Apps

Apart from ensuring safety and prevention of identity theft, face recognition software has many commercial applications as well. Many organizations across industries are recognizing the vast potential of face recognition apps and exploring different ways to capitalize on its features. Let us look at the Healthcare and Retail industries as an example.

Healthcare is constantly making giant strides with technology and facial recognition is contributing in unexpected ways. Researchers from the National Human Genome Research Institute (NHGRI) in the United States have come up with a face recognition system, which can diagnose a rare genetic disease called DiGeorge syndrome. People with this syndrome exhibit particular facial anomalies, which give them characteristic expressions that can be detected by facial recognition software. Despite the many challenges associated with effective detection, the team has developed software with an accuracy of 96.6%.

Another example of face detection software being used in healthcare is the facial recognition app developed by Listerine. This app enables a blind person to detect when somebody is smiling at them, by setting off vibrations when the face recognition app detects a smile. This helps the blind respond better in social situations, thus contributing to their quality of life.

Speaking about the further possibilities that technology can bring to healthcare, Christoffer Nellaker, of the Medical Research Foundation’s Functional Genomics Unit at Oxford says: “A doctor should in the future, anywhere in the world, be able to take a smartphone picture of a patient and run the computer analysis to quickly find out which genetic disorder the person might have”. This is already coming true with the help of face recognition.

Related Reading: Check out how modern healthcare is revolutionizing with automation.

Retailers have been using augmented reality to improve the customer experience for a while now. The retail giant Sephora has gone one step further and added a live 3D facial recognition feature to its Virtual Artist application. This enables a more accurate facial tracking and rendering, allowing users to virtually try on Sephora’s various products while they are moving in real time. Parham Aarabi, CEO of ModiFace, which is the developer of this function for Sephora says: “We believe the ability to see yourself with products can impact sales online … and thus the integration on Sephora will, based on our expectation, result in increased conversions and user engagement.” The goal with this move is to enable customers to try on their products in a fun and more interactive way. The accuracy enabled by this technology will go a long way in enhancing the customer’s experience and boosting sales.

By using face recognition software in making educated guesses about a potential customer’s gender, age, etc., big retail giants are optimizing their ad campaigns to specific target audiences. Such advertisements are more effective as they help deliver a targeted message that has a powerful effect on consumers. An example is the “Because I’m a Girl” campaign rolled out by children’s charity Plan the UK. The charity created bus billboards, which would scan the viewer’s face and display an ad depending on the viewer’s gender. This was done to highlight the plight of women who are denied rights based on their sex. Brands like Virgin Mobile, Nike and others have also used face recognition software to create a more immersive ad experience for their customers.

Face recognition software is closer to home than we think, and it is apt to look at ways in which your company can capitalize on its capabilities. Talk to us and let’s discuss how.

What are the different types of software applications in vogue……

Why Develop a Custom Platform for Remote Employee Hiring and Onboarding?