Fingent Recognized as a Great Place to Work-Certified™ Company 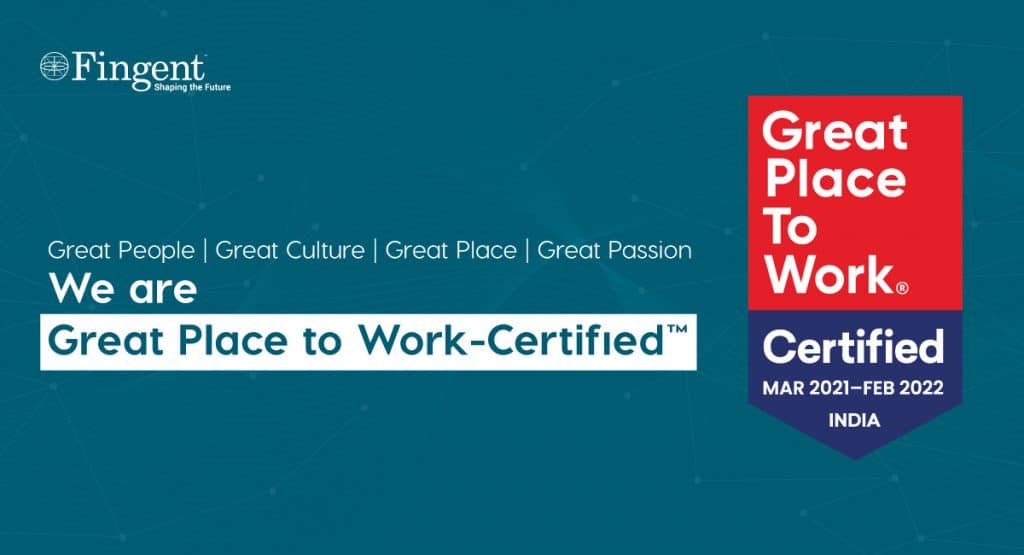 Fingent Designated as a Great Place to Work-Certified™ Company

Fingent is proud to announce that we have been Great Place to Work-Certified™ by the prestigious Great Place To Work® Institute. 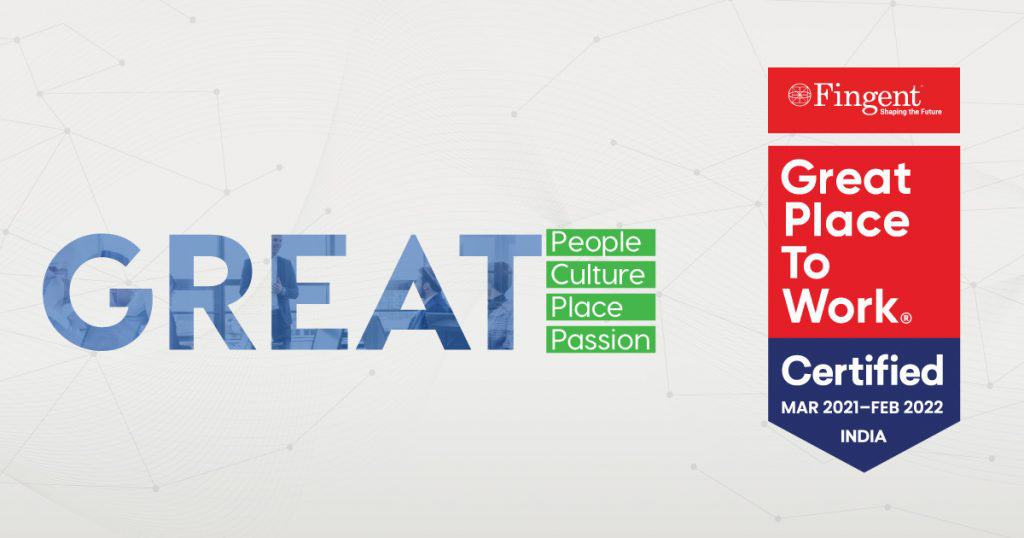 In today’s dynamic and competitive talent environment, culture and workplace values are the critical criteria that distinguish a company from its opponents. To hire faster, bring more capable players on board, and retain niche talent, companies need to establish and sustain a strong culture. Good people drive successful collaborations and enable companies to exceed customer expectations. Our people are our greatest asset, and our outstanding hiring practices have constantly led us to success.

That’s why we are super excited to announce that we’ve been officially recognized as a Great Place to Work-Certified™ organization.

They say, “Truth should come straight from the horse’s mouth.” True to this adage, the Great Place to Work certification is purely driven by employee feedback. It’s a research-backed survey in which the Great Place To Work® Institute gathers opinions straight from the people of all roles at an organization. The certification will be issued if a minimum of seven out of ten employees share a consistently positive experience at work. Fingent has ranked well above this average, with most of our employees testifying the company as a Great Place to Work.

“At Fingent, we strive to create an environment that makes people feel engaged, appreciated, and motivated to succeed. The Great Place to Work certification proves the trust employees have in us and encourage us to deliver our promises better,” says Samuel Varghese, Chairman, and CEO at Fingent.

“Bhuvana is a Senior Content Specialist at Fingent. She loves to research and develop creative and unique content related to technology and marketing. When not involved in full-time writing, you can see her pitching into editing and proof-reading all sorts of marketing collateral crucial for the company's branding.”

Work related injuries account for about $250 million in the United States, across several industries. And out of this, about 20% of them have been found to be lower back injuries. As a matter of fact, according to the U.S Bureau of Labor Statistics, back injuries accounted for a major number of lost employee work days.

Most organizations do know the importance of occupational health and safety practices, yet a lot of them still struggle to maintain it. Even though there are a number of systems available for it, organizations find it hard to decide the effectiveness of one over the other.

This is Where Wearable or Wearable Technology can Help.

Injuries can happen by chance, and sometimes they are unavoidable, like an accidental slip, or fall. Most other times though, one of the major causes of injuries is a lack of proper technique in performing a job. For instance, in the case of loading and unloading, often asymmetrical loading leads to injuries.

Wearables can help in this regard, by keeping track of and recording every single step taken, or move made, or turn or twist and promptly send back a report stating exactly where the workers pose a possibility for injury due to poor movements.

Wearable technology has become so sophisticated these days that they can accurately measure human movements and postures like never before. Thus they are capable of providing companies with prompt, objective data that can be easily interpreted and turned into effective results.

Wearable technology makes use of certain small sensors that can be placed on the workers, as they go about their daily work routines. These sensors are capable of providing live data regarding their movements, which can be accompanied with high-definition videos that can help accurately single out the risk areas easily. Repeated problematic movements can be identified as a possibility of injury. Alternatively, if the worker hasn’t made any movement for a particular amount of time, the system can automatically trigger an alert to co-workers, to act on instantly.

For example, VINCI, a global construction company in the UK, actually implemented wearables in their workplace. They placed sensors on their brick-laying workers to collect real-time objective data, which resulted in lesser risks of lower back injury and even increased productivity and efficiency. Some of the detailed results were:

GPS in Wearable to Ensure Technician and Client Safety

To support the above facts, the Institute of Management Studies at Goldsmiths, University of London has found that the productivity of people using wearables has increased by 8.5%

There are many more cases where wearable technologies can be used to improve workplace safety. For example, several Australian engineers have developed certain “patches” that are programmed to detect toxic gases and UV radiation, which can immensely help workers in the chemical manufacturing industry.

Another instance is in Rio Tinto, where their coal mine truck drivers use a certain device that resembles a baseball hat, to measure brainwaves in order to keep a check on and avoid fatigue-related problems.

Thus, it is evident that wearable technologies can do more than just reduce work injuries.

On a technical note, aside from the fact that work injuries affect productivity and efficiency, unsafe work environments can also increase the insurance costs incurred by a company. Moreover, hazardous environments, without possible safety precautions, can affect employee morale in a huge way, and in turn, reduce employee retention rates.
Hence, it is in the best interest of every organization to invest in improving the safety of workers, and reducing the risks of injuries. Wearables are capable of providing this much-needed safety, by carefully monitoring and comprehending human movements as well as other environmental factors, thereby helping to maintain an optimum level of health for them and the overall business.